A spokesman for the National Union of Ventriloquists announced today that performers will no longer refer to their work partners as ' dummies' in order to avoid any possibility of causing them offence.

From now on they will be known as 'People of Wood'

ps I'm still waiting for my petition to be reconsidered.
pps This new lot of spammers seem really bizarre. They tend to blitz me, then stop after a few days. I'll remove the ones I can find.
Posted by Mr Chalk at 7:04 PM 7 comments:

Steve Pope is the best Sheffield Landlord that we have encountered, Friendly, efficient and easy to deal with. He rents quality houses in Crookes, Sheffield to students from the University. He is one of the few landlords recommended by the University Housing department.

Click on the link to view his properties. You will not be disappointed

My petition was rejected because I included my blog address in the bit where it asked for more background details.

However I have resubmitted it with the offending item removed and will let you know if it gets past the censors.

Whilst we wait with bated breath for my petition to appear, I would like to offer a small prize to whoever reports the first 'Christmas themed' lesson.

Decorations have been up for some time now in the slums and early sightings have confirmed that they will exceed all previous records in bad taste, so we need to get in on the action quickly.
Posted by Mr Chalk at 7:51 AM 12 comments:

Thanks for your comments, I'll go with Peter's version:

'To publicly acknowledge that there is a massive discipline problem in many State Schools and to give teachers and Headteachers the necessary powers to enforce discipline and to deal effectively with problem pupils and their parents.'

I'll try and get this on the petition site today. As several posters have pointed out, there's no guarantee that anybody will take the slightest notice of our efforts. However this is never an excuse for inaction so let's just do it anyway.

'Anonymous' came a close second with a proposal to make naughty children into dog food.

Stop Press: After sending off my petition and not receiving the necessary confirmation email (No idea why you should need one) I've just read the bit on the side of the site which explains that it doesn't work with Hotmail. My petition has now vanished off their site. This sums up the Government far better than my petition did.

Will try to set up a new email address later when my temper cools.

Stop Press 2: Have sent off petition again and it is 'awaiting approval'

Will let you know when we can all go and sign it
Posted by Mr Chalk at 8:10 AM 12 comments:

For centuries people have handed petitions to our Government with varying degrees of success. Now a website has been set up here and I suggest that we make the most of it.

What is the single most important improvement that you would like in the State Education System?

Mine would be to improve discipline in schools. Sort that out and everything else neatly follows in my opinion. In fact this is the petition I propose:

'To publicly acknowledge that there is a massive discipline problem in many State Schools and to give teachers and Headteachers the necessary powers to deal with problem pupils and their parents.'

Now let's hear what you the readers think and between us we will put one together over the next few days. Let's keep it short and simple, then we try to get as mant people to sign it (via the website) as possible.

I can't promise that we will have any success, but I can guarantee that we won't if we do not try to do something. Education in many State Schools is nothing more than a joke and we certainly owe it to the kids to try to force an improvement.

If we accept that the main purpose of Education is to prepare children for later life, then Coursework, like many other things we do at school, gives them a completely unrealistic impression.

In any job; whether it be accountant, plumber or computer programmer, you get told to do something and it has to be done correctly first time. If there is an agreed deadline then penalties are incurred for not meeting it.

For example if you come to fix my boiler, but leave me shivering in the depths of winter then you will not get paid. If you build me a garden wall and it is not straight then you will have to do it again at much inconvenience and financial loss to yourself. If you are a solicitor and you have not prepared the necessary documents for a company merger due to take place tomorrow morning then you will have to stay in the office and finish them even if it takes all night.

With coursework however, the best strategy is to submit a half hearted attempt, let your teacher mark it and then (if you are not a teacher you might find this next bit hard to believe) hand it back to you with suggestions for how you could improve it. You then resubmit it and in many schools the same thing happens again. Do not worry if it is late or you simply cannot be bothered; your teacher will endlessly remind you, chase you and beg you to hand it in. You may even be given time off from lessons to finish it. No penalties will be incurred for your poor initial effort or lack of basic timekeeping.

Like so much of what we do in school; this is so far removed from what will actually be required of the kids in later life, that it is comical. Sadly it's also a complete waste of the teacher's time and any profession with a decent union (more on the farce that is the motley collection of Teaching Unions later) would have put a stop to it long ago.
Posted by Mr Chalk at 8:53 AM 41 comments:

Today, Christians all over the World celebrate the feast of St. Dweezil, Patron Saint of Children with Silly Names.

I would like to take this opportunity to ask all new parents to pause with me for a couple of minutes at noon and spend the time in silent contemplation.

Then name your child Mike, Andy or Jane rather than Gandalf, Jabba or Mayday.

Have a look at this:

If I had ever been rated on this site I am quite sure that I would have set a new record for the worst ever score. Mostly I taught my subject using the simple method I knew to work- ie explain something, then get the kids to do lots of examples. I tried to get them to work quietly and sit in neat rows where they were told to. (And I often failed miserably as you can see in my book)

Most education experts would wring their hands in horror at all this. I never attempted to make a martyr of myself by working endlessly, as I had lots of outside interests and I was never overly friendly with the pupils. I reckon the site would have given me a special award as 'Britain's Worst Teacher.'

What shocks me about this article is that she was actually bothered about her rating on a site designed for children's amusement. It seems that nowadays, popularity with the pupils is an important aim for many young teachers. I hope we're not just attracting the neurotic and those with no self confidence.

Previous post about this site here and here
Posted by Mr Chalk at 7:30 AM 36 comments:

This was sent to me whilst I was away by a teacher who occasionally regales me with stories from his school. He asks to be referred to as 'Genghis'

It's an email he sent to colleagues a few days ago:

Just thought I’d share this one with you: During p5 today, as I was walking back to my room from the upstairs photocopier, I saw **** ******* urinating in a corner of the corridor outside the Music rooms. **** ******** was with him and they were both quite unabashed by my presence. So much so, in fact, that **** calmly finished what he was doing, zipped up and they both walked off, laughing hysterically and leaving a large puddle of urine on the floor behind them. I find I am unable to add anything to this.

All the best
Genghis

I can't think of much to add to this either, and obviously I can't promise you that it is true. I suspect that it probably is; as actually it's no more bizarre than dozens of other stories I regularly receive.
Posted by Mr Chalk at 7:17 AM 13 comments:

Sorry about the lack of posts recently, I've been on a dive trip to the Red Sea.

I always rate airports by how many carvings of non indigenous animals are for sale in the Souvenir/junk shop. Marsa Alam scores a '3' (elephant, giraffe and penguin) Connoisseurs of tat will find much to admire whilst waiting for their plane.

Ahmed the cleaner/handyman, might not know how to fix a shower but did show me how to make a crocodile from six towels, a bedspread and two bottle tops. You can see his work below. (Try it and see if you can keep your drongo set amused) 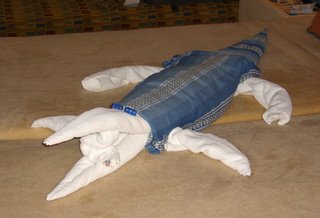 I can't believe that some people think Drama is a Mickey Mouse subject. I wish we'd had more of it when I was at school...

More than 400 schools now have their own Police Officer either based at the school or on call. We used to have one and he was great. He knew many of the kids' families (in a professional capacity) and provided our pupils with the only positive impression of the Police that they had ever had. Usually their encounters with the law involved one or more of their 'parents' being dragged away whilst screaming, swearing and fighting with a current lover, uncle, neighbour or both.

From my point of view (although sadly not all of the staff) he was useful for two other reasons:

1) He had the power to search pupils whom we suspected of carrying weapons or drugs. Obviously some would be found not to be, as I am not Sherlock Holmes. Their 'parents' would invariably complain and make threats involving solicitors, lawyers and other words that they could not spell.

2) He had powers of arrest. He very rarely used these but the sight of him frog marching Shane out of school is one that stuck in many pupils' minds.

However the funding ran out and he was withdrawn.

Let's see what the experts have to say for our entertainment:

Shauneen Lambe, director of 'Just for Kids Law' is outraged that a van full of police arrived to arrest a 15 year old boy. (Doesn't say what he'd done or if he was carrying a weapon) Given the pitiful list of approved restraint methods that the Police are allowed to use, I would have sent a coachload. She is concerned that these criminals will find it harder to get a job than their honest counterparts. Hmm...

Not to be outdone, the Time Educational Supplement is shocked to find that a 12 year old was arrested for stealing a mobile phone. Maybe they don't think that stealing is a criminal act any more.

There is a genuine concern amongst those whose job it is to be permanently concerned; that misbehaviour which would once have been dealt with by the school is now ending up in court. This is simply because we no longer deal with it.

Police in schools. We shouldn't need them but we certainly do in a lot of places.
Posted by Mr Chalk at 6:26 PM 24 comments: