This Sunday Stage 2 of the Tour de France will finish in Sheffield. A glorious chance to showcase the city to a Worldwide audience you might think. If you or I were on the Council, we would make damn sure that the route only went through the best bits of town and that there was loads of bunting everywhere, along with yellow bikes and jolly cycling paraphernalia. We might even decide to have the finish line somewhere nice (like Eccleshall Rd) and we'd make very certain that there was no litter anywhere.

But no, after several hours of beautiful Yorkshire countryside, the TV cameras will be treated to an urban wasteland featuring derelict factories and the remains of a recently demolished sports stadium. Spectators will be able to enjoy the view of the burnt out former 'Ski Village'. Mind you, it will at least encourage the riders to get a move on (for fear of being mugged) and I'd strongly advise the Team backup vehicles to keep their windows wound up and not to hang about either.

I was a student in Sheffield in the 1980s (in fact I actually lived on the road where the above picture was taken yesterday). A friend told me that the bags have been there for over a week and are being gradually pulled apart by rats! He reckons that the present Council are every bit as dumb as they were in my day and are taken by surprise with monotonous regularity each July when there is a problem with departing students leaving rubbish outside their houses.

At least other areas on the route are getting into it: 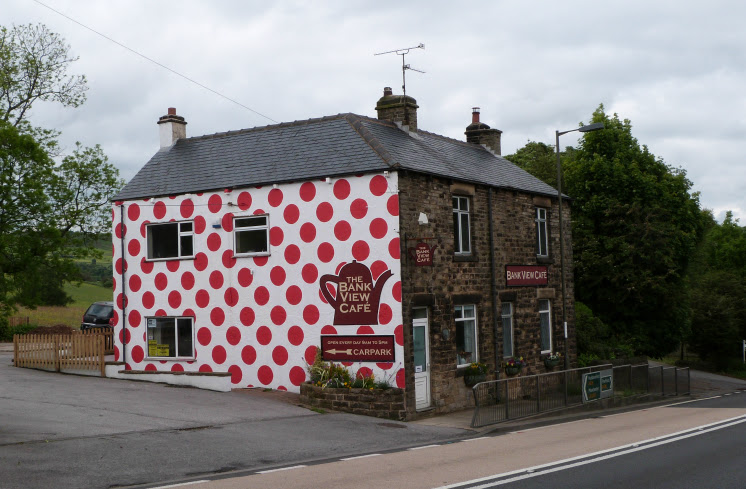 Anyway, hope it doesn't rain- I'm going up to watch near High Bradfield. If you see someone sitting on a deckchair  wearing a stripey jumper, a stuck-on moustache and a string of onions, with a baguette, cheese and a bottle of red wine, then do say 'hello'.