Behaviour tsar Charles Taylor (what a title!) has just finished reading my book and learnt that nobody gives a monkey's about Penalty Notices which are issued to the parents of children who truant. (Only half of those issued have ever been paid). http://www.bbc.co.uk/news/education-17705238

He therefore put on a stern face and suggested that maybe if parents can't be bothered to send their kids to school then we should take the fine out of their Benefits payments. (I'm not sure what the plan is for those who have a parent earning over £60 000, ie not eligible for child benefit). The NUT oppose the move, but don't offer any alternative solution. I'd make the parent attend school for a week alongside their child, so that they could see what the teacher has to put up with.

Maybe next week they will realise that nobody bothers doing Community Service either.
Posted by Mr Chalk at 12:57 PM 5 comments:

I get quite a lot of email from this blog. Not because I'm any good, but simply because I have no idea how to filter spam.

Some urgently require my place of birth and mother's maiden name, whilst others offer to increase the size of my whatsit. Others wish to sell me an IPad for $50 and introduce me to girls from the Ukraine who cannot spell. I am proud to have won the Nigerian State Lottery 134 times.

The worst however tend to be from student teachers who would like me to read through a thousand words of unremitting tedium that they have written on 'Modern Learning Methods' or some other such guff. They invariably beg me to publish it on here, presumably to help those of you who suffer from insomnia.

Today's offering was about a resources website. There are dozens of these and I was about to delete it when I noticed that the sender claimed to be only 15. Now as a rule, emails I get from younger people tend to be quite good. They are often insightful, they usually like my book and they invariably make the perfectly valid point that "we're not all like the kids you teach".

James Dowen has written a website called Learner Bites which aims to be a 'one stop shop' for everything educational. He is making a good go of it and the site is a damn sight better than anything I could come up with nowadays- never mind at 15. Whilst there's lots of competition in this area, the market always has space for someone young and innovative who can offer a better product. The lad obviously has something about him, so I've given his site a mention and I wish him the best of luck (even though he has not sent me any money).
Posted by Mr Chalk at 10:55 AM 1 comment:

Poor Kim Jong-un, seen here reacting with alarm after being told that dinner will be late 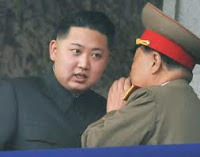 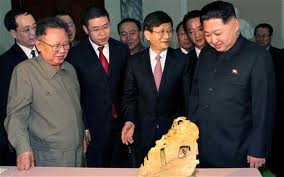 And here he is in happier times, receiving a new pet or possibly admiring tomorrow's lunch.

Have a listen to the song below, composed by his father, the recently departed Dear Leader back in 1985.

http://www.youtube.com/watch?v=rBgMeunuviE
Posted by Mr Chalk at 1:32 PM No comments:

The latest celebrity pairing, police blogger Inspector Gadget and Sophie Khan, a solicitor-advocate, (whatever that is), are having a bit of a falling out in true Hollywood fashion.

'Met Police aren't just racist while on duty, they're racist off duty too. They're members of BNP scum'

Gadget wasn't too pleased about this (I think he was offended by her terrible English) so he encouraged his readers to complain to her employers, GT Stewart, who wrote a disclaimer on their website and she deleted the tweet.

Personally, I think that their relationship might be on the rocks because she looks jolly cross with him in this photo.

Anyway, in round two Gadget's readers have started complaining en masse to the Solicitors Regulation Authority and in return she's now trying to 'out' him (presumably this means revealing his identity rather than getting him to admit that he cavorts with other men). Dan Collins, publisher of Gadget's Book is offering to spill the beans for £50 000 and in the spirit of David Cameron's "We're all in this together", I'm willing to undercut him at £47 500.

I do hope she decides to try and find out who I am, as I could really use the money. (To avoid paying any tax on it, I plan to donate the whole lot to my charity which helps middle class Brits buy ski chalets in the Alps)
Posted by Mr Chalk at 3:43 PM 7 comments:

Schools in Nottingham may be moving to a shorter Summer Break, four weeks instead of six. Obviously the teachers aren't happy.

It's completely taboo to say this, but I don't mind admitting that one of the reasons I went into teaching was for the long holidays. I always made the most of them and thoroughly enjoyed every minute, regardless of whether I had any money or not. They are a huge perk of the job.

Unfortunately the idea of a six week summer holiday is bonkers. Many teachers and pupils simply get bored during them and it creates huge childcare problems for parents. It's equally mad that University students have three months off in the summer.

However if you cut the holidays without any increase in salary, you make the job even more unattractive.
Posted by Mr Chalk at 12:33 PM 6 comments:

Well I go away and look what happens?

The Government decides that teachers don't need a staffroom. Who in their right mind would take a job in a school that doesn't have a place where you can escape the madness and mayhem? Where you can enjoy a cup of tea in a dirty cup, whilst moaning about Kyle, Royce and Duane? I was supposed to be saying this on Radio 4s Today programme on Thursday morning but due to my own incompetence, I can't make it.

The Government also wants to introduce different rates of pay for teachers in different parts of the country. The NUT doesn't like this idea.

I'd go much further and allow all schools to pay their teachers whatever the hell they like and let the market set the rate, just as it does for plumbers, lawyers, hairdressers and accountants. Why not pay the better ones more than the rubbish? It's simply a case of giving the schools enough money. If we gave the worst schools a big wedge of cash to attract better staff, then we would see far more improvement than from all the endless new 'initiatives to raise achievement' and for a fraction of the cost.
Posted by Mr Chalk at 10:10 PM 9 comments: