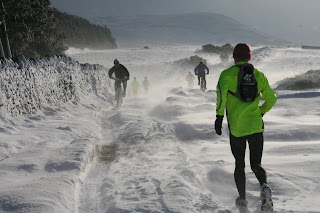 Whenever I take a photo, I usually seem to miss the intended subject or cut off their head. If I do manage to capture them in the shot then you can be sure that my thumb will also feature prominently. On rare occasions when all goes well with the composition, you can generally guarantee that the picture will be somehow washed out or blurred despite the miracles of modern autofocus and lighting. (I never even dare touch any of the buttons described as 'options' for fear that the camera will simply explode.)
Looking at this terrific picture from yesterday, you will immediately realise that I did not take it. (The other giveaway is that I am the runner on the right in the hideous yellow top with the legs of a spider) I can also confirm that it was exceedingly cold but stunningly beautiful.
I'd like to thank all readers of this blog for, well; reading this blog and taking the time and effort to comment on it. (The comments are usually wittier and wiser than the posts and after four years I still haven't had to remove a single one, which must say something about my readership)
Merry Christmas to all of you and very best wishes for the New Year.
Frank Chalk
Posted by Mr Chalk at 5:38 PM 21 comments:

Imagine if you returned home one night to find three masked men in your home, who then proceeded to tie up your wife and children, threaten them with a knife and beat you in front of them.

Tell me in all honesty that if the opportunity arose, you wouldn't kill them all without a second thought. I'm not a violent man by any stretch of the imagination, but I can say with absolute certainty that unlike Munir Hussain, I would not have shown any restraint whatsoever.

Why on Earth has this man received a two and a half year jail sentence, whilst so many real criminals are routinely let off? I don't care what the liberal elite might say, I'd have bought him a gun.

ps there is a Facebook group here which supports his release and their Government petition will appear on Thursday Dec 17th.
Posted by Mr Chalk at 8:55 PM 40 comments:

If any of you would like to know what the wretches I taught get up to outside school, then have a read of Winston Smith's excellent blog. He works in a home for lazy bastards- sorry disadvantaged young adults and his bosses are as cretinous as mine were.

What should we do with these kids? Lots of people would say "Stick 'em in the Army!" except that the Armed Forces don't want to touch them with a barge pole. What they need is some role models- strong adults they can look up to, not run rings around. These adults need the power to enforce rules and show their charges exactly what they need to do to make themselves useful members of society and then make them do it. It's not rocket science.

All too often nowadays, we hear of people simply crossing the road and walking by when they witness a crime, so thank goodness one brave member of the public stood up and did the right thing, phoning Torbay Council to report lollipop wielding do-gooder Craig Hodges who, untrained, unsupervised and without even having attended a Diversity Course; had been blatantly assisting children to cross a busy main road opposite their school in Paignton, Devon. For goodness sake, if we don't nip this sort of Social Behaviour in the bud, then where will it end? Before we know it, young people will be picking up discarded cans and crisp packets and throwing them in litter bins without a second thought for the consequences.

Like all true heroes, the mystery caller did not wish to talk about his bravery and brushed aside any suggestion of a reward:

"I didn't have time to think of the danger to myself, the training took over and I just did what any of my colleagues would have done in that situation. I could tell straight away that he was up to no good; he had a friendly, pleasant manner and a yellow fluorescent jacket, which was later found to contain a CRB Check. He has shown no remorse for his actions whatsoever and the sooner he is put behind bars, the safer the people of Paignton will be"

The Council have denied that they are planning to take Mr Hodges' children away from him.
Posted by Mr Chalk at 12:45 PM 12 comments:

The main problem I always found with parents evening was that the parents you really wanted to see never turned up. If pressed, they would always have some excuse which was usually incomprehensible "Sally weren't right and the bus didn't stop on the way back an' 'ow am I supposed to know... blah"

Another problem was that many teachers tried desperately to be positive about the pupil "Kaylee would work really well if we could just get her to stop texting the layabouts who hang around the school gates..." and only told the parent good things; so when they got to me, they were unprepared for the truth and simply wrote it off as the rantings of a madman.

Some schools even give the kids a day off and have 'Parents Day' for no obvious reason, other to presumably make it harder for parents with jobs to attend. Amazingly, at other schools; parents don't even get to see their child's teachers, they just listen to a report read to them by the form teacher; which is an utter waste of time. Surprisingly few parents complain- I'd hit the roof.

Most parents never really had much of a clue about what they wanted or why they were there, as this report suggests. The ones that were clued up always took me by surprise. Best of all is when you mix up a child with another one who has a similar name and tell the parents how well they are doing before realising they were expelled last month.
Posted by Mr Chalk at 8:29 AM 5 comments:

What has gone so wrong with our society that we allow this wretched woman, who stole £41 000; to get away scott free, just because she has blown the lot?

Under any sensible justice system, she would be working hard for the rest of her life to pay it back; first to her poor uncle and then after he croaks, towards the cost of a jail to stick her in.

Apparently 'scott' comes from 'scoet' which was Olde English for a tax
Posted by Mr Chalk at 10:26 PM 1 comment:

It's Your Time You're Wasting

As a special Christmas treat for any reader who, despite my constant advertising; hasn't got round to buying a copy of "It's Your Time You're Wasting", I have posted this link on the sidebar so that you can read a little bit of it and then hopefully buy the whole thing from Monday Books for £7.99 (free postage).

"It would make an ideal Christmas present either for yourself or for someone dear to you." Mrs. Chalk
Posted by Mr Chalk at 12:50 PM 4 comments: