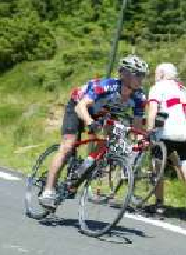 Imagine 10 000 people in a bike race on closed roads, with huge climbs and hair raising alpine descents. This was the 'Etape' on Sunday; a 112 mile course in the Pyrenees over the stage that the Tour de France will ride this Thursday.
You can really fly through the bends using both sides of the road (although judging by some of the competitors' bike handling skills, this was probably what they normally ended up doing) and there are loads of spectators along the route shouting "allez!", ringing cowbells and generally doing French things, so you feel just like a pro as long as you don't look at your watch. (The photo shows me just missing someone who was wheeling a broken bike out of the way.)
There were three big climbs on this year's course; Col du Marie Blanc, which wasn't too bad except for the bottleneck near the top, the unrelenting Soulour and just to finish us off at the end; the 12 mile horror of the Tourmalet. All in all, a hot, sunny and extremely memorable day out. Comical moments included a donkey wandering across the road on the freewheel down to La Mongie after the finish, which nearly wiped me out.
If you've ever even vaguely considered it, then get training and race next year. There is a real carnival atmosphere about the event and loads of Brits go out to do it.
Posted by Mr Chalk at 7:23 AM

Reminds me of Graham Greene's 'A Shocking Accident'!

Lot's of nice photos and a grueling story here.

Chapeau - hope you had nicer weather than the pros!